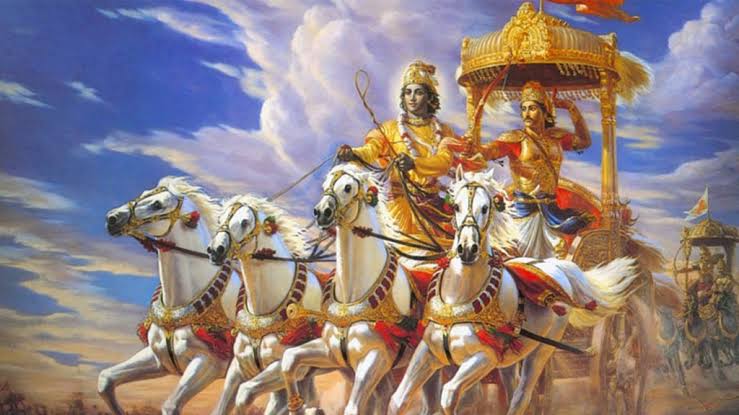 Sanathana Dharma (followed by Hindus) does not emphasize a single prophet or a book. This religion is more of an evolution of a thought process that relies upon a more pluralistic view.
While on the one hand, it appeared to depend on numerous rituals and prayers, on the other hand, it evolved from the democratic exchange of philosophical ideas between the teachers and the students (Gurus and the Shishyas).
Besides the philosophical discussions, many of the Upanishads also outline the methodologies of various prayers and rituals to individual Gods.

The Essence of Bhagvat Gita

The essence of such Hindu philosophic thoughts also came from individual research under the direction of a Guru. This tradition of “Guru-Shishya Parampara” is thus the backbone of Hindu culture to this day!

The thought led to the refinement of procedures for the worship of individual gods and culminated into epic stories (Puranas) about these Gods. Veda Vyasa (Veda means “knowledge,” and Vyasa means “writer.”) systematically compiled all this religious knowledge in 18 epics and four Vedas.

The Mahabharata is the most comprehensive of all the epics. The central theme of this epic is the conflict between King Drutharashtra’s hundred sons (the Kauravas) and his younger brother Pandu’s five sons (the Pandavas)

On the first day of the war, Arjuna, the most valiant and talented among the Pandava brothers, came to the battlefield on a chariot driven by Lord Krishna, his friend, mentor, tutor, and guide.

When faced with the idea of killing his cousins, tutors, uncles, and relatives on the Kauravas camp, he became averse to picking up arms against them. He mentioned to Krishna that even death by starvation would be preferable to killing such close relatives.

Lord Krishna then gives him some counseling. The next 700 stanzas of Bhagwad Gita cover the discourse between them on the battlefield.

Aside from the simple counsel that Arjuna should fight, Lord Krishna touches upon the entire Hindu thought process on Sanathana Dharma in these 700 verses.
The narration of Sanjaya (the blind reporter blessed with the divine eye) covers the unfolding of the battle to King Drutharashtra. This narration is the summation of all Hindu religious thinking.

The Prominence to Essence of Bhagvat Gita

Soon Bhagwad Gita became Hinduism’s most important holy text. Soon there were several more commentaries and translations into other Indian and foreign languages.
The book grew so prominent in Hindu culture that Hindus take an oath to the Bhagwad Gita in the same way that Christians take the oath to the Bible.
Charles Wilkins translated Bhagvad Gita into English for the first time in 1785.
In 1808, Friedrich Schlegel, published the first translation into German. He also had the credit of establishing Indian philology in Germany.

In 1885, Edwin Arnold was the first to produce an English poetic translation to the essence of Bhagvat Gita.

“The Bhagvat Gita gives me a sense of peace that I don’t get from the Sermon on the Mount. When disappointment confronts me and there isn’t a ray of hope in sight, I return to the Bhagvat Gita. I find a verse here and there that makes me smile in the middle of overwhelming catastrophes – my life has been full of external tragedies, and I owe it all to Bhagvat Gita’s teachings that they have left no visible, indelible scars on me.

The first chapter of the Essence of Bhagvat Gita covers the circumstances that led to this discourse. In the second chapter, Lord Krishna insists upon Arjuna to fight because it is his duty, that killing a body does not mean murdering a soul, and that the ultimate form of action is when one does without regard for the consequences. He also reminds him that inaction is a grave sin in this context.
Later, he explains the differences between deeds (karma) that transport you to heaven but require you to be reincarnated later and deeds that permanently unite you with the Lord.

He gives it his thoughts on many facets of dharma such as:

In a nutshell, Bhagvat Gita is a succinct encyclopedia of what Hinduism stands for.

Understanding the Essence of Bhagvat Gita

Thousands of translations and interpretations of Bhagvat Gita are already available in English and other languages. My current translation is in free English verse and in as simple a manner as feasible. I have tried to compose what I understood in a simple poetic form after reading numerous translations and commentaries. Since I am not a great scholar, I have not attempted to provide a commentary on the meaning of each verse.
I devote my translation to the lay English reader interested in Hindu philosophy, and I ask that he/she consider this as an appetizer. I’m hoping that my efforts will lead you to read several more scholarly Gita commentaries by eminent scholars to understand the treasure house that is Bhagvat Gita.

Given below is what some eminent people all over the world have said about Bhagwat Gita:

When I read the Bhagvat-Gita and reflect about how God created this universe everything else seems so superfluous.

In the morning, I bathe my intellect in the stupendous and cosmogonal philosophy of the Bhagvat-Gita. In comparison with which our modern world and its literature seem puny and trivial.

The Bhagvat-Gita is a true scripture of the human race a living creation rather than a book. It has a new message for every age and a new meaning for every civilization

Bhagvat-Gita is the most systematic statement of spiritual evolution of endowing value to mankind. It is one of the clearest and comprehensive summaries of perennial philosophy ever revealed; hence its enduring value is subject not only to India but to all of humanity.”

The Bhagvat-Gita inextricably links to Vaishnava philosophy, and discloses the fundamental significance of this theory, namely, soul transmigration. The opening chapter of the Bhagvat-Gita may hint upon instructions to participate in combat. After reading the second chapter, it is evident that knowledge and the soul are the ultimate goals to accomplish. When reading the third chapter, it becomes clear that deeds of justice are also important. We may realise that the ultimate conclusion is to forsake all imagined beliefs of a religion. we can entirely surrender to the Supreme Lord if we continue to calmly read the Bhagvat-Gita. Bhagvat Gita covers every aspect of life on earth. very stanza gives you a different meaning and an hitherto unknown insight.

Bhagvat Gita provides you with a life changing prospective and knowledge.

COMING UP – The translation of various chapters of the essence of Bhagvat Gita.

The Spirit of Gratitude